Creating a Facebook Campaign - Bidding, Budget and other final settings

Putting the final touches on your campaign and making sure you budget it correctly!

Written by Nicolas Vibet
Updated over a week ago

The very last step in the process of creating your first campaign is to fine tune it. 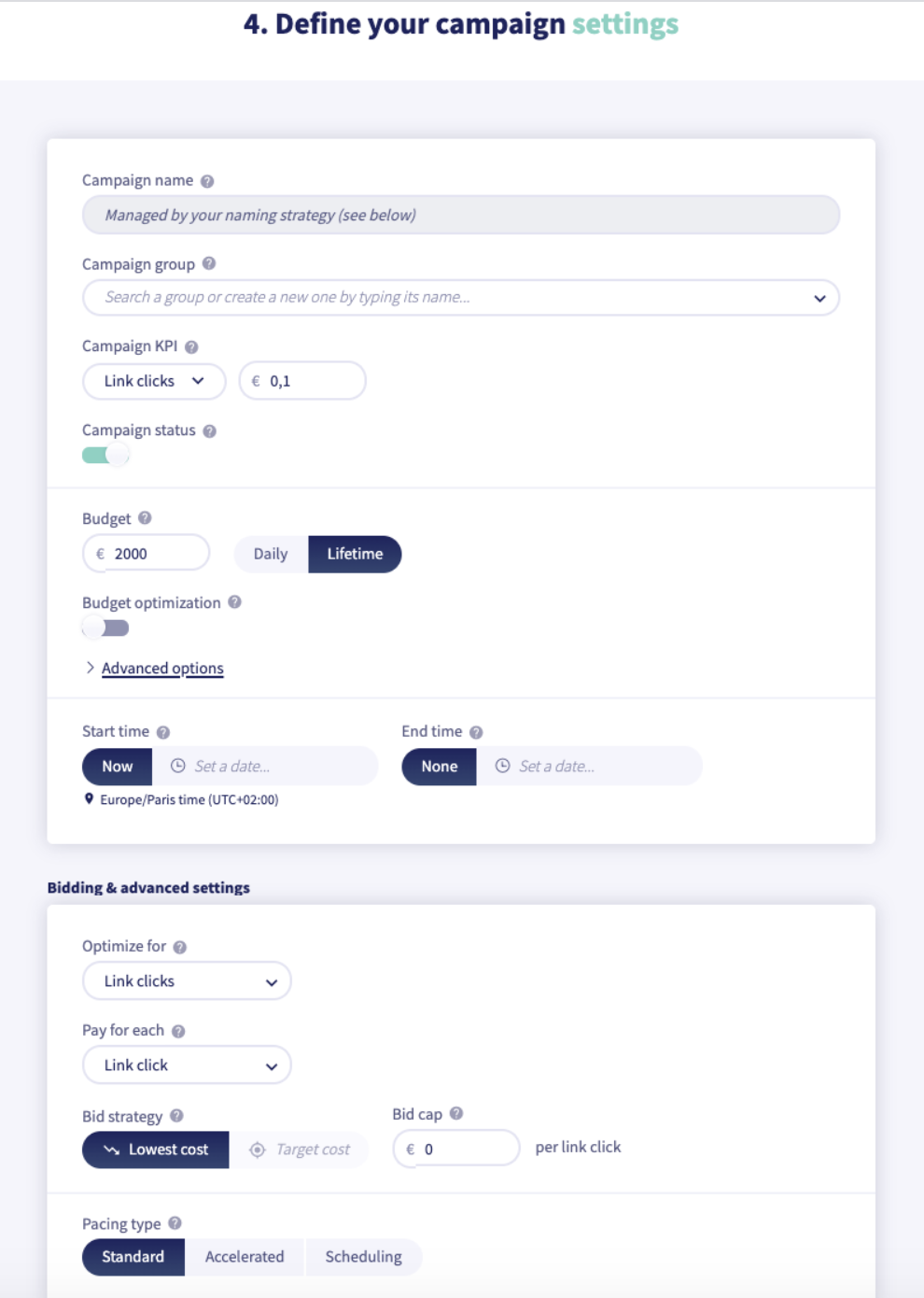 Start by naming your campaign, and assign it to a Campaign Group. Campaign Groups will help you in the future to better analyze how your ads are doing - you can gather campaigns that have similar objectives for instance.

Next you will have to set your Campaign KPI. This is a MakeMeReach only feature ; this will help you keep in mind what you are trying to achieve with your campaign. It will simply display an indicator, from green to orange, that will tell you whether or not you're achieving results that fit the target you had set for yourself.

We'll give you a lot of options when it comes to choosing your Campaign KPI, so select yours according to your campaign!

You can decide to set your campaign to OFF, if you want to prepare something in advance, or create them for someone else for instance. If you're testing, don't forget to turn off your campaign so that you don't spend money you were not planning on!

Next, it's time to set a budget for your campaign and just below you can decide if you want or not that your budget is optimized according to the performance. More details about this option can be found here.

You can choose to have a Daily budget, or a Lifetime one, which would mean that it's the total budget for the campaign.

You can also set a budget cap, which will limit your spending - this cap will never be spent over. It's most useful when you choose a Daily budget, to make sure your campaign does not spend overboard.

Another advanced setting you can choose is to split your budget between each ad set depending on the size of it - it's called the "Population" split: 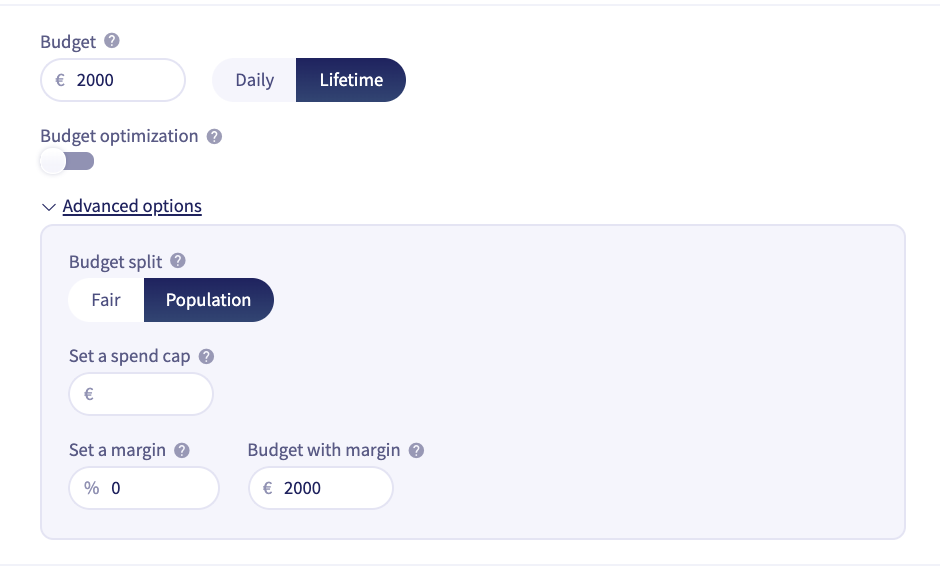 Finally, you will need to decide on a start date: you can choose to start your campaign immediately, or schedule it for later. Then you can decide to keep it running indefinitely, or choose an end date. 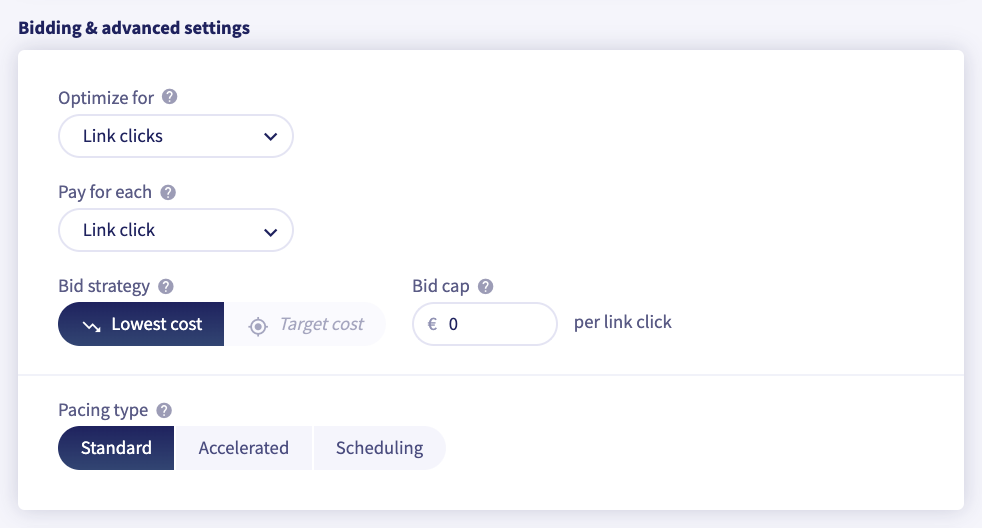 You will first need to select what your campaign will be optimized on. This is one of the most important things to do when creating your campaign. 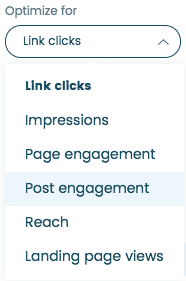 We give you a few options:

All of those will change depending on the objective of your campaign.

Then, you will have to decide on your bid strategy:

Next, comes the way you will be charged: You can choose between being charged by the impression (CPM), by the link click (CPC), or by the view (if you chose an objective related to video views).

Finally, you'll need to decide on your pacing - this will impact how quickly your budget is spent.

The standard pacing will tend to spend in a more balanced way during the day, whereas the accelerated one will spend as much as possible, as quickly as possible (always in the boundaries of the budget, of course).

You can also decide to schedule your campaign for specific days and hours:

You should now be all set to start your first campaign!

You'll get access to a Summary after finishing up on your settings, giving you an overview of your campaign, and the option to either go back and change some things, or create your campaign: 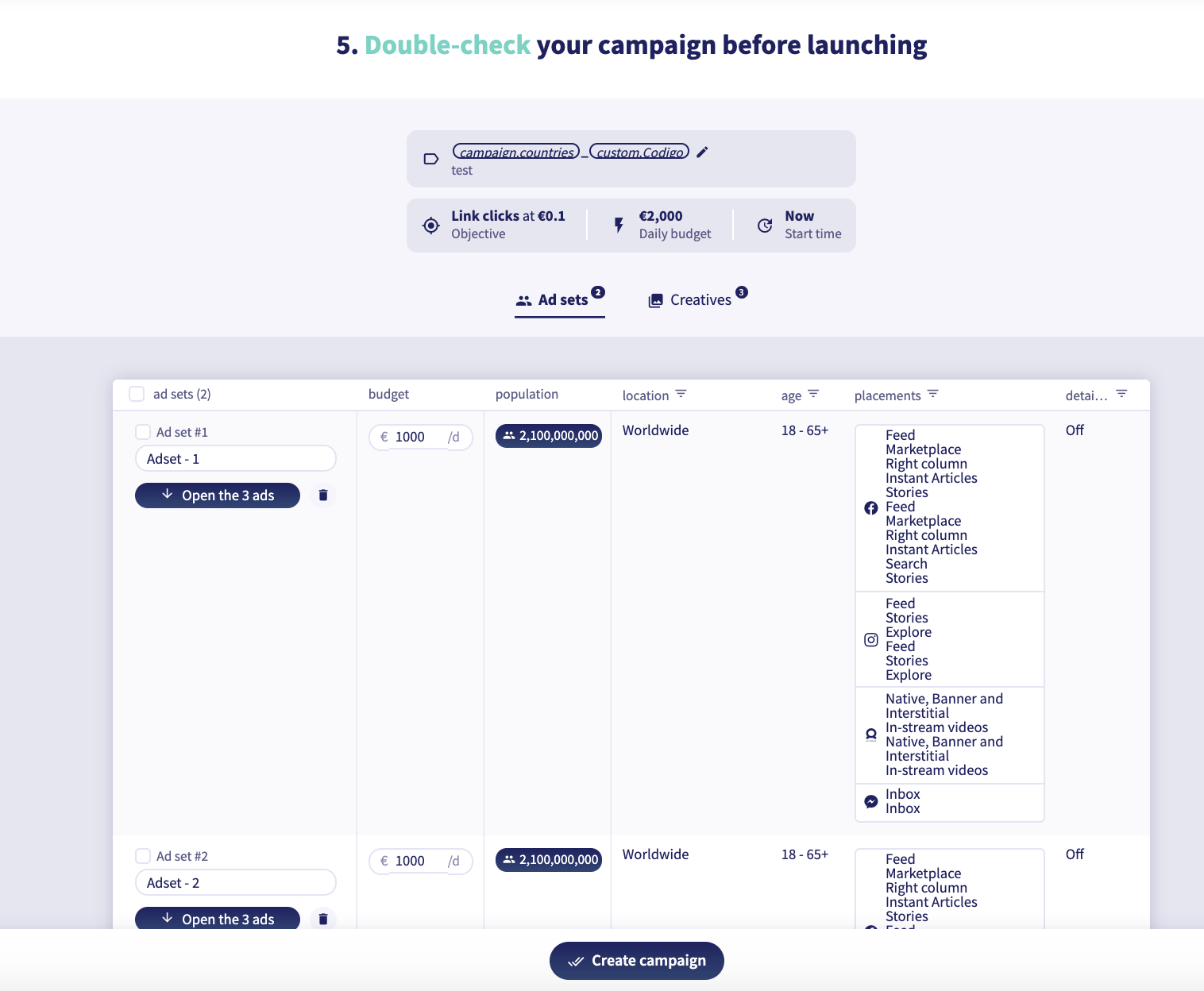 You can also edit from here the Name of the Ad Set and the budget you want assigned to it!